A Step-by-Step Guide to Audience Development

Intel launched its digital magazine, iQ, in 2012. But in early 2017 the team switched focus from chasing eyeballs to sustaining loyal readers. Luke Kintigh was head of publishing at Intel iQ at the time and shared how they did it.

This article originally appeared in the February 2018 issue of CCO.

By all accounts, Intel iQ was a successful digital publication in 2016. It boasted 2 million monthly readers who averaged more than two minutes of engaged time per visit. Yet the Intel team wondered: What is the additional value of a returning reader versus a first timer?

A lot, it turns out.

The true challenge of becoming a successful (brand) publisher is sustaining an audience, says @LukeKintigh. Click To Tweet

The iQ team knew its efforts were successful. Even so, it was clear to Kintigh that something was missing. He explains: “Creating content is not the difficult part of content marketing. Distribution of your content, particularly with paid media is also not that hard to do initially. The true challenge of becoming a successful publisher is sustaining an audience – providing so much ongoing value that they naturally seek out your content and become a loyal reader.

“When this happens, you’re transitioning away from renting momentary audiences one campaign at a time to owning long-term audiences that add real equity to your brand … equity that remains well after your product launch or short-term KPI.”

Rather than chasing volume in the short term by whatever means available, the team committed to earning readership in a long-term relationship – a simple enough maxim but one that eludes many content marketers. “We can get people to watch a video or read a blog post, but when you take a ‘direct response’ approach to content marketing, you essentially start from zero each time you attract someone new,” explains Kintigh. “We wanted to develop and deliver value to our audience over time and think about how to keep them coming back.”

Why build an owned audience rather than rent and win scale?

Look no further than the Facebook reach collapse of 2016. If you Google “Facebook reach plummet,” you’ll see the collective wail of thousands of community managers. An analysis by SocialFlow showed average organic reach per company post fell 52% in the first six months of 2016. When you depend on the Facebooks, Twitters, YouTubes, etc. of the world, you’re also beholden to their whims. Facebook in particular has shown that marketers will have to pay to pull the kind of reach they enjoyed in years past.

To figure out how to build a longer relationship with the customer, the iQ team defined what it calls a “customer ladder” – the steps someone takes to progress from first-timer to engaged subscriber. The most important KPI for the team is the number of email subscriptions – a sign that someone finds the iQ content valuable.

iQ ad exposure: Kintigh calls this person the “fly by” – someone who may happen upon a mention of iQ or Intel content but hasn’t slowed down to consume that content.

First-time reader: First-time readers may find iQ through a native ad, a social media ad, or a shared social post. They stop and read because they’re interested in the content iQ is publishing.

Repeat reader: Repeat readers visit iQ more than once and demonstrate an affinity for the content iQ talks about – from virtual and augmented reality and artificial intelligence to robotics and autonomous vehicles.

Recirculation: Kintigh says a small subset of their readers are loyalists or as he puts it, “fanatics.” This is a particularly valuable group to Intel because they care deeply about the topics iQ shares and can help steer the program’s editorial strategy.

What makes Intel’s example unique is that the iQ team believes truly engaging quality content is key, but it also knows to get that content in front of an audience, it must leverage data science, technology, and advertising. In other words, quality alone will never win; masterful content marketers exploit technology to maximize their investment in quality.

Predictive: Predictive tools like SimpleReach help the team optimize the content they publish; predictive tools analyze what has worked as well as content trending online, and suggest topics, key phrases, headlines, and formats to ensure iQ maximizes its reach.

For growing an audience

Recommendation engines: While some marketers use tools like Outbrain to grow awareness, the iQ team finds it much more effective for retargeting those who had visited iQ at least once.

Marketing automation: The team uses Eloqua and Adobe Tools to automate all parts and processes of an ongoing content marketing program – from defining key audience segments and third-party overlays to personalizing emails based on content consumption patterns and engagement behaviors.

Email marketing: Intel uses Eloqua for its email service provider (ESP), which allows it to map content consumption and behavioral actions to the content email subscribers receive based on actions and attributes.

Customer relationship management: Once an iQ reader is in the email database and reads iQ content, the team triggers lower funnel actions and tactics based on the signals derived from the data. Tools like Salesforce or even programmatic media buys can be leveraged to micro-target iQ readers for specific calls to action more aligned to a sales goal.

In addition to defining an audience development framework and matching the right content to each stage, the team also changed its approach to content marketing strategy. “We began to move into a programming mindset,” says Kintigh. Consider how the team treated a series devoted to virtual reality. 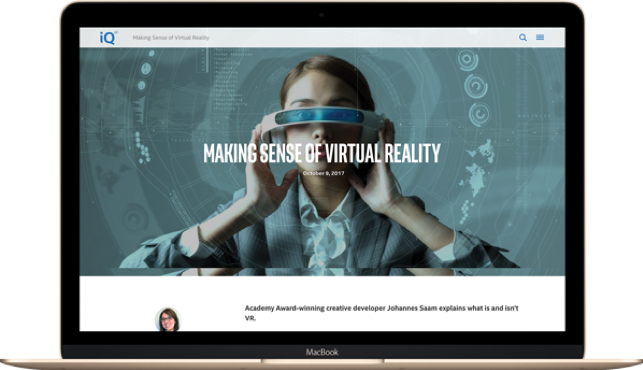 When taking on a new topic, such as the future of virtual reality, the editorial team designed a serial approach. In the case of VR, it built a three-part series to dive deep into VR’s use case for retail, software development, and impact on tech startups. Some serial projects included as many as 10 primary stories. Also, the series included short feature videos interspersed with other content in a splashy presentation on iQ.

With a three-part VR series and accompanying video, the team chopped assets into smaller pieces for other channels. For example, the video was cut to size for three stories on Snapchat. Users swiped up on the short video to go to the primary story. And a feature video was uploaded to YouTube. Fifteen- to 30-second videos were used for retargeting ads, leading back to the primary content on iQ. And because of the insights available through retargeting, sequential ads had higher click-through rates.

“Delivering sequential content has been a big win for us,” explains Kintigh. “You have to think about content from the initial hook to the ultimate payoff, which can span a 15-second video on social to an 800-word long-form article on iQ.”

Part of Intel iQ’s success is a thirst for doing better, not necessarily doing more. The team spends considerable time testing and tweaking: studying what the audience wants through the signals it receives, fine-tuning content and delivery to maximize the network effect from social media, and analyzing how best to deploy new tools available on the market.

Rethinking the pop-up: Many content-first companies push the “sign up for our emails” pop-up on a first visit to their site … sometimes before the visitor had a chance to read anything. That’s a mistake, says Kintigh, because readers rarely sign up for an email subscription on the first visit. The team determined repeat readers are four times more likely to sign up for emails than first-time readers – so it delayed the pop-up push until a reader’s subsequent visits. And as the team finessed the analysis – looking at post-click data to spot more patterns – it realized someone who spends more than 90 seconds on the site is eight times more likely to sign up. These findings helped the team optimize the precise moment a visitor sees the sign-up pop-up.

Optimizing native ad timing: Similarly, the team studied how to use other channels to maximize value. Native ad platforms like Outbrain, says Kintigh, are more effective for retargeting than for growing awareness. And Facebook ads are more effective when displayed to users who have visited iQ multiple times rather than someone who’s unfamiliar with the publication.

Valuing loyalists: About 15% of email subscribers are “loyalists” – people who open and click on more than 10 iQ e-newsletters every three months. “We look at these loyalists as our core focus group,” says Kintigh. “Loyalists are immensely valuable to us, so we spend considerable time listening to their actions and feedback and learning from them.” The opinions of loyalists help define the editorial calendar and are instrumental in suggesting new content formats and concepts.

Agile fuels the approach: “Having an agile team that’s truly connected to your content supply chain is critical to drive the progression of your audience development strategy,” says Kintigh. He explains that, to succeed with an audience-first approach, editors must understand how their content is moving audiences from one stage to the next, and content distribution managers must see how content is being developed and optimized to drive strategic actions.

Pulling off the kind of experimentation described here isn’t for the faint of heart. Even with a successful track record in 2016, Luke Kintigh says the team knew it could do more. The pivot from emphasizing sheer volume and traffic to focusing on building an owned and loyal audience was essential to withstand the whims of social media algorithms and to build a sustainable content program.

CM: What was the breakthrough for you and your team?

LK: As marketers, we want to believe we can build audiences instantly, but we can’t. Significant trust and loyalty occur over time and happen sequentially.

At Intel, we researched and refined a strategy that helps us drive first-time readers to become more engaged and take the next strategic action – all of which leads to loyalty and subscription. The strategy isn’t based on a hunch but a series of KPIs we measure ourselves against.

We believe content is not the end goal; it’s a means to an end. The ultimate aim is to harvest and cultivate an audience from the content we create. If done right, your content is merely the cheese to your mouse trap. Simply reaching your audience with an ad or headline is not the problem to solve in today’s ecosystem. Moving people to take action, instead of scroll past your ad, is the real challenge.

Anyone can get an auto-play video view, but can you get your audience to stick with the video for more than five seconds? And even more, will they click through to the full story?

If you’re just after views as defined by Facebook, then the answer is you don’t care. However, if you’re trying to build a long-term audience, then think differently about how to create content differently for Facebook. It’s all about how to use Facebook as a means to harvest an audience from its one billion users on to your own platform.

The question for content marketers should be, “How do I get first-time readers back to my site? What else do they want to read? What intelligence can I gather from their behavior and data that we possess?” All of these ideas and actions are what Netflix and Amazon do extremely well – and as marketers we need to learn from them. They get exponentially smarter about what their users want as they consume more content. That’s the holy grail for content marketers who want to build ongoing relationships through valuable content.