Research: The Window to an Audience’s Soul

When the Sierra Club of Colorado needed to raise awareness about its conservation efforts (and raise money to support them), the grassroots organization used Voice of Customer research to get inside the heads of its members.

In short, there’s a lot of competition for donations.

This was the problem that faced the Sierra Club of Colorado (SCC) in early 2018 when it faced tremendous pressure to protect the state’s wild places. The Trump administration was in the process of rolling back protections on national parks and monuments. Though Bears Ears National Monument in Utah was the most visible target (and received the most attention in the media), plenty of smaller lands were also under threat by the Bureau of Land Management, including Colorado’s Great Sand Dunes National Park.

“A key tenet of the Colorado Sierra Club is making sure that our public spaces are protected and accessible for all Coloradans.” says Hillary Larson, former communications coordinator at the Colorado chapter and now digital innovation campaigner for the national Sierra Club. “Our open spaces are some of the most valuable resources Colorado has in terms of both natural and general beauty. Thirty-five percent of our land is public and we need to do everything we can to protect that,” she says.

The Sierra Club of Colorado wanted to activate its members in response to the conservation rollbacks. How could it cut through the din of competing conservation groups and make a true connection with its audience? How could they make such an impression that Coloradans would be inspired to invest in the cause?

The SCC turned to Mary Iannotti, a long-time rock climber and marketing strategist, to craft a message that would break through.

“Voice of Customer is a research technique that lets you get into the head of your target audience,” says @maryi and @SierraClubCO, via @CMIContent. Click To Tweet

Iannotti’s niche is a type of marketing research named Voice of Customer. She explains: “Voice of Customer is a research technique that lets you get into the head of your target audience. By using Voice of Customer, content marketers can find messages that evoke emotion because they hit on the pain points that a product and service can solve. Your copy will then be able to connect with your readers on a deeper level.”

The SCC’s audience includes paid members, some of whom make additional donations, as well as email subscribers who might be encouraged to become paid members and/or donate.

To understand the passions of SCC members and subscribers (and where they felt disconnected), Iannotti surveyed SCC’s audience, segmenting it into two key groups:

Her goal was to understand what inspired people to donate to SCC over other organizations, as well as understand the barriers facing those who had not yet donated. She used both an online survey as well as one-to-one interviews to collect the results.

The surveys brought to light three key insights Iannotti thought the campaign had to address. Members and subscribers wanted:

Iannotti counseled the SCC to think about content not as a one-way education but as a way to help subscribers take action and engage. She often counsels clients to think about what they can give rather than what they can teach. She cites Robert Cialdini’s book, Influence, in which he writes about the rule of reciprocity – if you give something to someone, they’re more likely to want to reciprocate. If SCC could give members the guidance they wanted, Iannotti reasoned, members would also feel more connected to SCC.

Larson says these insights were essential to transforming how the team created content: “From the start, Mary (Iannotti) talked about storytelling – about using stories to engage supporters and donors and make them feel like part of a community.”

The survey and interview research led to a finding that was deceptively simple: While conservation encompasses a wide range of issues – from protecting wildlife and making wild places more accessible to educating the public about how to minimize their impact on wild places – the priority issue for members was the preservation of public lands, particularly given what they were reading in the news each week. Sierra Club now had a point of focus for its fundraising campaign.

From research to campaign

At the core of the fundraising campaign was a four-day drip email program that focused on storytelling, while giving subscribers specific actions they could take to protect public lands. “Email marketing can often feel cold and impersonal, but Mary (Iannotti) used [the survey] data to make her email campaign donor-centric and engaging,” says Larson.

The first email tapped into that desire for activism identified by Iannotti’s research. It told subscribers about the CO Outdoor Recreation Economy report, asking them to share it with their representatives. The email also included fact-based arguments, such as the $28 billion outdoor enthusiasts pump into the state’s economy. There were helpful comparisons too, such as how outdoor recreation created nearly four times as many jobs (229,000) as the oil-and-gas (39,000) and mining (19,000) industries combined. 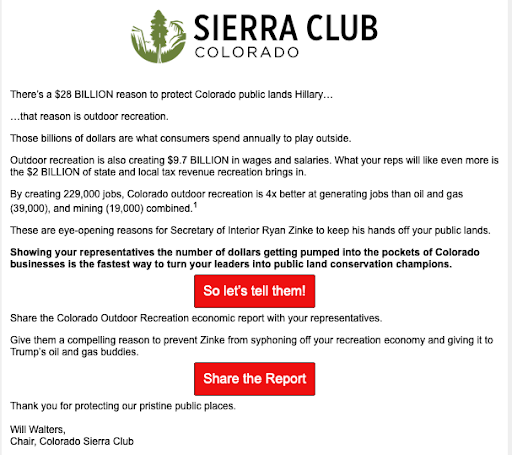 In response to requests to see results, the following day’s email focused on the Sierra Club’s activities and achievements. In just six months, the SCC hosted 50 outings, demonstrating the club’s success in getting people outdoors. Iannotti drew upon the club’s history, revealing how such excursions were Sierra Club founder John Muir’s secret weapon for recruiting wilderness advocates, just as he had once recruited Teddy Roosevelt to the cause. In 1903, Muir took Roosevelt on a three-day camping trip in Yosemite, which turned out to be a game changer for national park policy in the decades to follow.

The third email empowered subscribers to protect the environment by giving them a Green Energy Guide. This opened the door for Iannotti to report on more of the club’s achievements. Subscribers read about the latest cities to commit to using 100% clean energy, bringing the club closer to its goal of getting all Coloradan cities on board.

On day four, the final email explained the history of the public land safeguards and how the White House and the Department of the Interior were rolling back those protections while simultaneously reducing the window for accepting public comments from 60 days to 10 days.

This email also introduced a call to action to a donation landing page, which explained the SCC’s upcoming plans to halt the regulatory changes and outlined the recent wins the club had achieved.

The campaign was an integral part of the club’s wider game plan to give people a louder voice regarding the protection of public lands by getting more conservation champions elected in the 2018 state election. Fifty of the 59 candidates endorsed by the club won their races.

The email campaign tripled the conversion rates of a benchmark campaign, while the organization saw a 10-fold increase in overall revenue. Following the campaign, SCC also nearly tripled its number of donors – a sustaining win given that past donors are more likely to contribute in the future.

Larson explains: “It showed us the value of making campaigns less about us and what we need and more about our members and how they would like to make a difference.”