The Sound of the Crowd

“Followers” is such a loaded term, with connotations of leadership, of rapt social media crowds awaiting guidance, of committed allegiance. But who is really the follower and who is the influencer in this relationship?

My favorite gag in Monty Python’s Life of Brian comes when Brian opens his window shutters in the morning (warning: gratuitous willy shot) to find a massive throng of people waiting to hear his wisdom.

FOLLOWERS: Yes, we are all different!

When I Googled the original script to correctly quote the above, I was tickled to discover the writers gave the unidentified man in the crowd a name: Dennis.

It’s a nice idea to think of the social media followers outside of our metaphorical windows as millions of individual relationships, where every connection or follow signifies a deliberate and curated kinship between two people – even between a brand and a customer. And marketers still describe and define social media activities with the warm and emotive language of interpersonal relationships: conversations, sharing, communities, networking, sentiment, and so on.

Of course, most social media connections signify little more than an exchange of technical permissions between two avatars that may never even read each other’s bio.

Most social media relationships are just permissions between avatars that may never read each other’s bio, says @Kimota, via @CMIContent. Click To Tweet

While we might idealistically want to view each person in the crowd as an individual, our brains just don’t work that way. So, we use words and concepts such as “audience” or “followers,” reducing all of the individuals in the crowd to a single amorphous entity that’s easier for us to comprehend.

It’s not just in social media, either. Demographics, personas, segments – we might group people together in various ways, but each is still a crowd, represented and often defined by numbers and statistics, behavioral trends, and characteristics. These data-driven criteria can have the effect of assigning personality traits to the crowd as if it were the individual, but we should never forget that they are just abstractions.

As is often the case, our brains aren’t nearly as smart as we like to think. Anthropologist Andrew Dunbar established through his studies of primates that the size of the brain correlated roughly with the approximate number of meaningful relationships an individual could comfortably manage. In humans, he determined this limit to be approximately 150 – which has become known as Dunbar’s number.

This was a matter of survival for our primitive forebears. The bigger the social group or tribe, and the stronger the relationships within that group, the more likely it was that Ugg would stay alive and thrive long enough to meet Thrugg, settle down in a nice cave, and have lots of Paleolithic ankle-biters to one day inherit the family mammoth-hunting business.

Incidentally, Dunbar also determined approximate numbers for close friends (50); confidants, or those you might turn to for sympathy (15); and those with whom you form your closest bonds, usually best friends and members of your family (5). But let’s stick with 150 for now, which Dunbar describes as “the number of people you can have a relationship with involving trust and obligation.”

While Dunbar’s number was probably more than enough for Ugg and Thrugg to stay on top of all their likely social interactions, it eventually became a limitation for their descendants as populations and communities grew over the centuries. This limitation can be seen reflected throughout history with communities and villages documented as far back as the Domesday Book consistently reaching an average size of 150. It appears to be the optimal size for a social group, beyond which a community begins to fragment.

Dunbar’s number suggests the human brain is only capable of managing 150 relationships on average, writes @Kimota, via @CMIContent. Click To Tweet

Eventually, people needed to conceive and manage groups larger than their squishy and inefficient monkey brains could easily comprehend – people they might never meet, never mind remember their names, faces, and personal histories. While a tribal chieftain might know everyone in his tribe personally, a prime minister manages and makes decisions for populations at a scale the human brain just cannot conceive in the same way.

The only way to understand large groups of people beyond Dunbar’s number was (and still is – our brains haven’t evolved that much) with various abstractions; numbers and statistics, demographics and trends. As the numbers tick higher, we move from concepts of the individual to concepts of the crowd.

Which brings us back to our ironic and humble friend – Dennis.

Marketers might envy Brian for how effortlessly he attracts a large audience, but that’s not actually what happens. Out of a brief plot necessity – impersonating a prophet to avoid some passing Romans, as you do – Brian delivers a few vague and generic platitudes to a handful of onlookers. (While not obvious on screen, the script reveals one of the onlookers to be Dennis.)

Despite not being that impressed, those first few onlookers interact with Brian, providing the social proof that encourages more and more people to join them. The crowd isn’t following Brian; they’re following the first few people that indicate something is happening.

So, Dennis deserves as much credit for attracting the vast crowd as Brian does. But when you think about it, that’s only logical.

Take the oft-cited goal of content marketers; thought leadership. A brand wants to be seen as an authority on this topic or that because authority begets influence and influence (it is hoped) will transform an audience into customers.

But that passive view of the audience assumes everybody is simply milling around without direction waiting for someone to tell them what to think. As many a politician has discovered over the years, the ambition to be a leader doesn’t automatically deliver willing and dedicated followers.

“If you have to tell ppl you’re a thought leader, you ain’t one,” writes @Kimota. It’s up to the audience. Click To Tweet

Thought leadership isn’t claimed by the person or brand for themselves; it’s bestowed by the audience. Only the audience gets to choose whose ideas are worth following. If you have to tell people you’re a thought leader, you ain’t one.

In fact, claiming leadership, demanding an audience without first having earned it, is more likely to trigger the opposite reaction – distrust and skepticism. Consider all of those social media accounts with bios stuffed with words like “entrepreneur,” “guru,” “maven,” and yes, “thought leader.” Self-belief can be a powerful thing, but without evidence such claims aren’t much better than adding a bunch of fake awards or qualifications to the bio.

So, if social proof is what initiates a crowd, fuels it to grow, tells it who to trust, and even influences how it behaves, the problem becomes how to get some.

From the CMI Blog 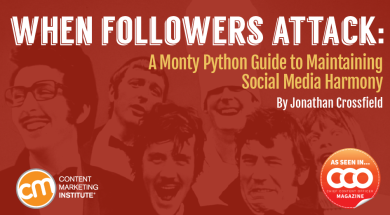 It can be a surreal experience for any social media marketer when the brand’s social media presence is beset by trolls or plagued by complaints. Instead of being frustrated and bewildered, here’s how to find the best punchlines.

Have you ever noticed you laugh more when watching a comedy with friends compared to watching alone? In 1989, psychologists Robert Provine and Kenneth Fischer published research that showed we are 30 times more likely to laugh in social situations than we are by ourselves.

It’s why so many TV sitcoms were once “filmed live in front of a studio audience,” providing a basic form of social proof to trigger our brains into thinking it’s acceptable to find a particular gag funny. Basic, but effective.

Unfortunately, TV execs quickly realized that a canned laughter track would laugh even when a studio audience didn’t. A 1974 study suggested canned laughter is particularly effective in encouraging audiences to laugh at bad jokes. Even though we know it’s canned, we find the joke funnier. The effect of social proof still influences our reactions and opinions.

Canned laughter may be far less common today, but rather than indicating any change in its effectiveness, this trend probably has far more to do with audience awareness of the practice. If canned laughter is used to sell bad jokes, eventually the audience will see canned laughter as proof that all the jokes are bad.

Social proof, such as the laughter of others, provides a useful shortcut for our brains to decide how to act. As Robert Cialdini writes in his book Influence, The Psychology of Persuasion, “Whether the question is what to do with an empty popcorn box in a movie theater, how fast to drive on a certain stretch of highway, or how to eat the chicken at a dinner party, the actions of those around us will be important in defining the answer.”

Social media is extremely good at telling us what is funny, what is sad, and, more importantly, how to react. It’s almost entirely driven by social proof and peer pressure. Ever tried to explain why a particular meme or joke is hilarious? Saying, “You had to be there,” merely underlines that it was only funny because of the shared experience of the crowd in that moment rather than the gag itself.

Similarly, one of the reasons many websites continue to display social media share numbers on articles – inaccurate though they may be – is because they provide a powerful form of social proof that encourages more people to share. But once such trends are recognized, there are those who will look for ways to take advantage of them. We may curse the TV execs who developed the laugh track, but marketers also have history when it comes to simulating inauthentic social proof.

Just as servers drop a few coins into the tip jar at the beginning of a shift, bloggers and marketers use tactics that are – initially at least – less about distributing the content to the right audience and more about getting those first few shares. This is purely so that visitors won’t see a series of zeroes that might be seen as evidence that no one else liked the article. If no one else shared, why would you? If lots of people shared, why wouldn’t you? A few years ago, there were plenty of blogger communities specifically set up for this purpose.

More recently, social media platforms have battled third-party apps and social media marketing “services” that offer to increase followers and engagement through automation. These were popular with social media marketers looking for quick wins or growth hackers who favor automation over genuine activity. But they were particularly popular with influencers who were eager to inflate their audience and engagement numbers, thereby deluding brands into paying for audience value that may not exist.

In 2018, Instagram put users on notice that it was actively removing inauthentic likes, follows, and comments generated by third-party apps. As a result, many have closed over the last year or so.

Power to the people

In many ways, all of the laugh tracks and engagement trickery, fake followers and bogus bots, demonstrate attempts to create a virtual Dennis, one that can be controlled and scaled, with the express intention of manipulating the behavior of every other Dennis in the crowd.

But audiences are smart. While social proof can help you build and influence an audience, it can also turn that same audience against you just as quickly if a few followers detect everything isn’t quite as authentic as it seems.

Just because Dennis surrenders his individuality to the crowd doesn’t mean he is passive or powerless, vulnerable to manipulation by anyone demanding his allegiance. Instead, Dennis – humble, generic, conformist Dennis – represents the real power in this relationship.