Content creation silos inhibit great work. We shouldn’t be producing content as we would a Ford Focus. Here’s the problem and the solution.

This article originally appeared in the April 2017 issue of CCO.

As companies turn their content marketing efforts up to 11, we’re seeing our own little industrial revolution, moving the content creation process from the craft workshop to the high-volume assembly line.

The conditions are right:

We have the division of labor – research teams, copywriters, designers, developers, experts in search and social.

We have enormous pressure to create more content faster – to lubricate our lead-nurture flows and fill our virtual funnels.

And we have a precedent – as Henry Ford and earlier pioneers proved that assembly lines dramatically increase manufacturing productivity.

It’s no surprise that we tend to make content the same way we make cars and coffee machines – in sequence.

The researchers hand the findings to the writer.

The writer turns it into copy.

The designer makes it pretty (boy, am I going to get in trouble for that).

The illustrator adds the images.

The animator makes them wiggle (see above).

The developer codes it for the web.

The promotion team pushes it out.

The analytics geeks measure the impact.

And we do it all over again tomorrow.

It’s not at all uncommon that this whole thing happens without any team member even talking to the person immediately to the right or left of them along the conveyor belt (much less skipping a level and talking to someone two steps away).

For an increasing number of content teams, this is only a slight exaggeration. A freelance writer may never even know who designed the piece. A research strategist may not even know that a social media pro will one day flog the findings on Facebook.

It’s evolved this way because it’s efficient. Because it means a small team of specialists can churn out an awful lot of work to an acceptable standard.

And that’s the problem.

Because assembly lines were created to put together identical products made from standardized parts. As my favorite smarty-pants, Gustav Wikipedia, says, an assembly line means that “a finished product can be assembled faster and with less labor than by having workers carry parts to a stationary piece for assembly.” (How does he know so much?)

I’ve bold-faced the words that power the whole sentence – and the whole model: Faster. Less labor. That’s what assembly lines are for.

If your content marketing strategy is simply to generate more content faster and/or with fewer people, this series of hand-offs from one blindfolded specialist to the next is your go-to go-to-market model (your GTGTM).

But if you actually want someone to enjoy the content experiences you create, to be changed by them, to learn from them and to recommend them to their friends … maybe it’s not such a great idea to produce your content the same way children and slaves produce smartphones. (No, I won’t take that back. Look it up.)

Unlike toaster-ovens and leaf-blowers and photocopiers, it’s different every time.

As a grey-haired, B2B agency guy, I’ve been involved with both kinds of content creation processes: the assembly line and the agile, group-hug-based collaboration. And the latter runs circles around the former (while making that beep-beep roadrunner sound).

At Velocity, our best pieces are the ones where designers, developers, writers, researchers, and geeks work together – from the start and all along the way, in cute little stand-up scrums. 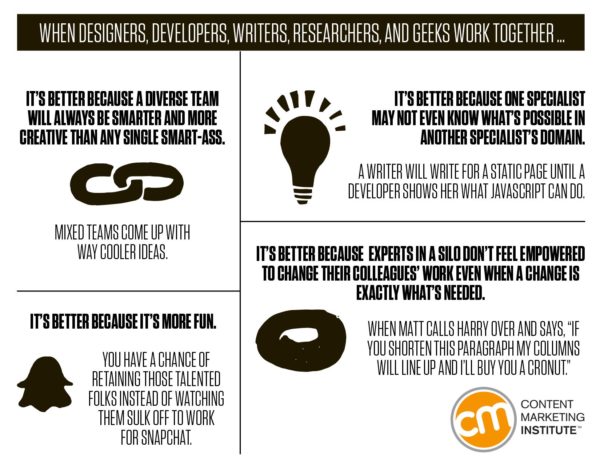 That’s my plea to all you chief content officers (and pretenders who somehow are seeing this magazine): break up your assembly lines. Get your weird and wonderful teammates into the same room. Order in some cronuts (I recommend the Pumpkin Maple Cinna-munch Cashew Twirl™). Brief them to change the world.

THE SWEET SPOT
THE CONTENT TILT
Building the Base
Harvesting Audience
Diversification
Monetization
This site uses cookies to provide you with the best user experience possible. By using Content Marketing Institute, you accept our use of cookies.
Manage consent